Today I had a nozzle crash into bed and drag . the tip was clogged, the filament had a jam and had to take nozzle out and then print head apart.

it would be nice if Zortrax provided instructions and  an exploded view pictures of how to change HOT TIP END and nozzle.

I would love to see an exploded vied of the head and a print the whole unit ion exploded view with bullet callouts for each part.

it would be great for ordering parts in the future.

I found out that after turning off nozzle you have to pull it off because it is like a press fit to the hot end tube that it fits over.

Then the extruder for the filament:

then I found a little chunk of hard plastic filament on the extruder gear that made the head not allow the filament to be pulled thru by skipping when it got to the chunk of plastic  stuck to the gear.

I ordered some new nozzles and an new hot tip assembly , I can only hope they provide instructions on how to install the hot tip end.

I will be using the emergency nozzle till I get the new stuff.

I would also like to know if I can drill out the old nozzle with a .003" drill and use it again?

It's only 4 set screws to change it out. Two on the side of block. One for temp sensor and one for heater. The other two are pictured. Loosen those and you can pull hot end out. Make note of how the small wire connects to top of block. That needs to be removed as well. I believe that is used for Z-zero detection. 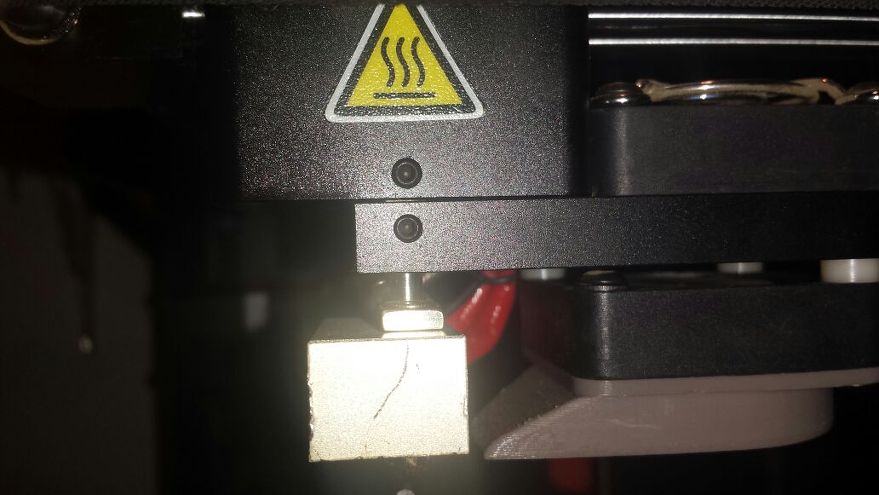 Hey buster you can also heat the tip up with a torch to burn out ABS. (off the machine) Heat just enough to melt plastic. I guess someone ruined a tip by keeping the torch on too long. It worked fine for me though. Way easier than trying to drill and not mess up the tip.

And you should remember that if you want remove nozzle the hotend must be heated, otherwise you damage nozzle thread.

thanks guys for the info and help !!

yeah make sure you have it heated i just tried it cold with out thinking and ended up with a broken nozzle and a hot end with a piece of nozzle i cant get out.

yeah make sure you have it heated i just tried it cold with out thinking and ended up with a broken nozzle and a hot end with a piece of nozzle i cant get out.

I had The same. Removed the remaining part of the nozzle by drilling from the top and then use the Zortrax pincer to get out the remaining thread. Quite a job…