New to M200, having some problems

I have some problems and would like your opinion.

Have seen a lot of prints here and on the web, and most don't have the problems I see. Maybe they were cleaned or something?

I see a lot of burnt filament. Either on the outside of a print or melted inside of the walls. Also a lot of stringing and some dispersed blobs as can be seen from the following picture. It's a phone cam picture, sorry for that. There are a lot more blobs, stringing and black burn marks than can be seen in the pic. Every few layers there are new strings, new blobs and new burns. 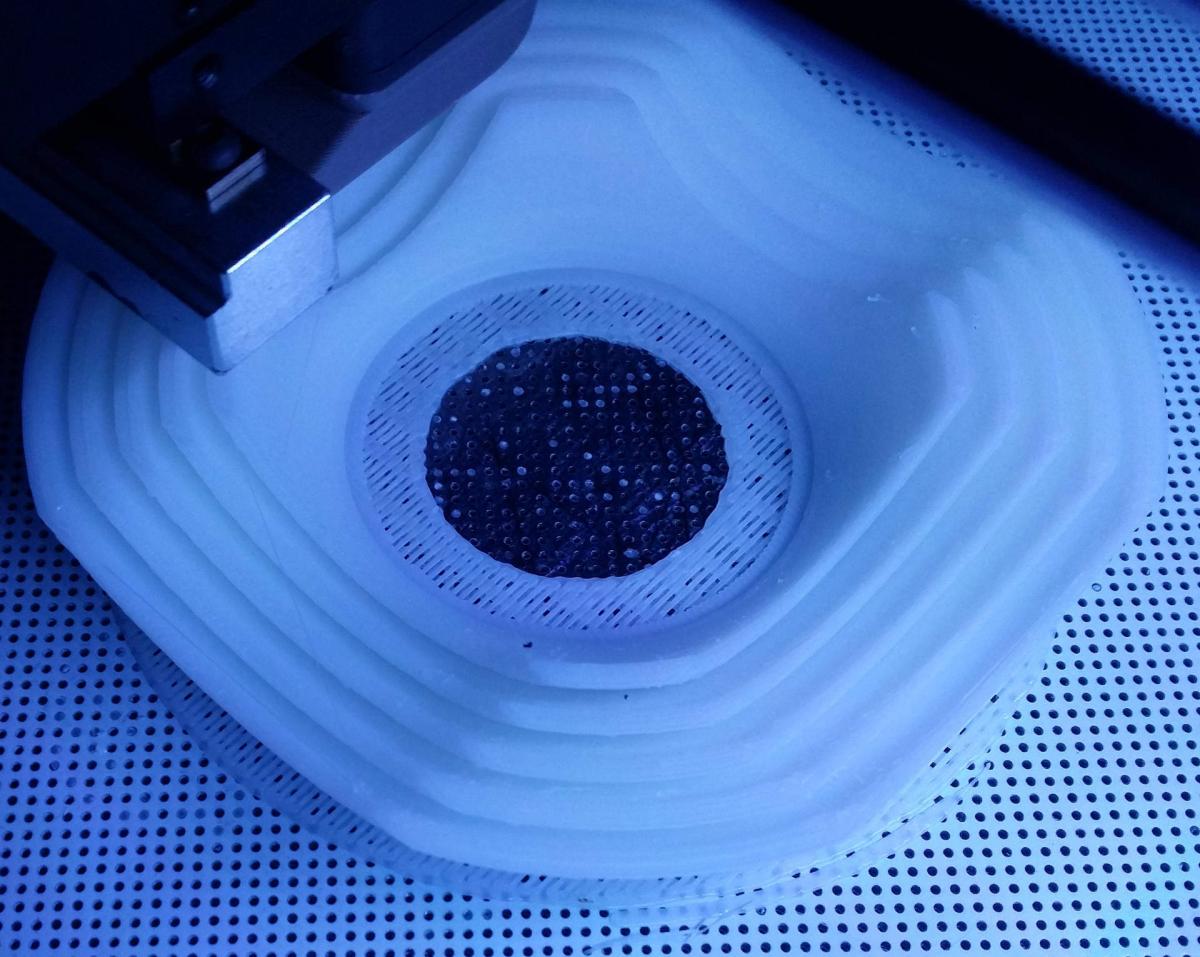 Hi Caeser, welcome to the board.

That does seem odd with the latest z-suite. Burns certainly were more evident in earlier versions( as were the blobs), but from 9.4 I have seen a marked reduction, if not total elimination of them. Also the stringing is odd too. I haven't seen any stringing for quite some time.

The blobs and burn marks are strongly connected, as the blobs tend to end up stuck to the nozzle at some point, burn, then fall off into the print causing the brown marks.

Have you got another roll to try ? Something isn't quite right, and it could be a bad roll.

Thanks Jamie. The roll was shipped with the printer, very well sealed.

Just to be sure I'll throw it tomorrow in my drying storage box and open a new one.

I am glad to hear that it is not expected and will try for a better print then.

Will report back after more tests.

I see no problems with blobs and stringing until is possible to clean it only with fingernail but maybe Zortrax can try to add Z jumps at jumps to improve it.

I've only had my M200 for a bout 3 weeks and printed 60-70 parts so far. Maybe had 1 burn mark on one part, but it was tiny. All other parts were fine. Never had any stringing. Although I haven't found this to be an issue with the M200, make sure that when it starts the print and wipes its nozzle there no excess plastic sticking around to catch on the nozzle. It will burn and may drop off at some point. Also when the nozzle is preheating before the print, give it a wipe over with acetone on a cloth or tissue, but be careful because it's really hot.

New roll of Z-ABS, this one was pretty dry. 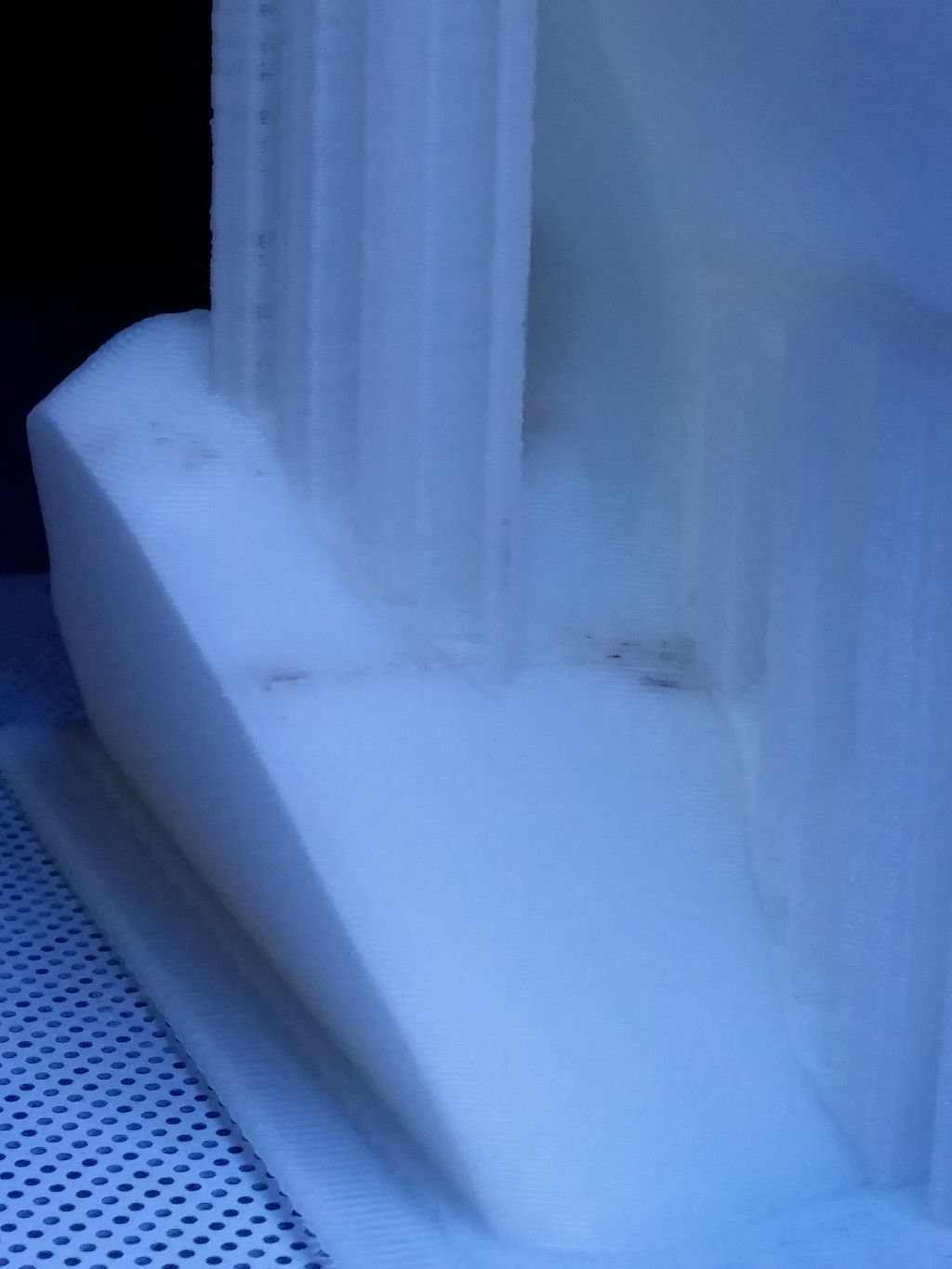 This print has even worse burn marks. The longer one is ~40mm wide There were no strings and no blobs though as there was no retraction in this print.

Burn marks are inside, near surface, on both sides (left and right shoulder), with no way to get them out.

Hotend nozzle is completely black now after only 1 spool used.

It never happened to me with other printers so I have no idea what to do. I will try a camera to record the print and see what it does. Looks like diving into the material and then discarding burnt and melted remains.

Here are two shots, first is top layer, second is showing burns inside wall plus unable to remove supports.

I have tried and I can only remove them with the sidecutter. Will probably have to sand the remains.

I guess temperature is too high by 10-20C while hotend does very slow moves.

Is the nozzle tight ? Heat the extruder and check with the tool, but don't tighten too hard.

I think you need to contact support. There is something wrong with your printer. Maybe the temp sensor is bad? With the latest zsuite I have zero burn marks and support comes off beautifully.

Check the set screw that holds the temp sensor in the heater block… Maybe it’s loose and causes too high extruder temp.

Do you have other colors than white? How is the support removal there?

Andre just for curiosity, have you tried support removal on flat parts with ULTRAT at .09 resolution?  Does it comes beautifully too?

No, have not tried that because I heard it still has issues.

Are you seeing burn marks and support removal issues with 0.19, Ahntila?

I mostly need to work .09 on ultrat because my clients ask for it.

sometimes .14 is not enough

Also have noticed infill has improved a lot on .09 because parts are much more solid, and you are able to fill thinner walls.

.09 is ok for most parts, but not those flat and large not even if they are very big.

on .14 and 0.19 have noticed burn marks but also nozzle is very dirty so until I have not cleaned will not say there are issues related to SW, in fact I have experienced very lilttle this problem and is very common even on larger industrial printers time to time.

But I do have a particular model that have issues of course I will send it to support to see what's going on if the problem is still present after cleaning the nozzle.

I have solved my problem.

My print head was 30C hotter than the printer thought / was setting it so it's understandable that I was not able to print anything decent at 290C.

Just did a small "tuning" and lowered the temp by 30C and everything is perfect now. Printing nice and cool at the right temp.

how did you Printing temperature of 30Â° ?

I think this is a taboo subject.

Any idea why your temp was off by 30C? Did some component crap out? It's great that you could compensate for it, but it would be good to know the root cause... e.g. if a loose sensor set screw caused it then the next time you tighten this screw you will be 30C too low...

Or did Zortrax tell you what to "tune"?

My TC set screw was really tight and probably it made a new contact point there.

From that point upwards everything worked as it should. That's why I made the temp measurements, to verify it all.

A thermocouple placed directly on the hotend revealead the higher temperature.

I got the printer right before Christmas, had no way and no patience to contact support so I solved it myself.

I don't want problems with starting a temp-mod thread and it isn't my intention.

It involves very good de-soldering and soldering skills. If someone has those skills then for sure the mod itself is extremely easy to deduce.

In theory it is possible to change temp down to room temp and up to 600C.

I'm having the same problem with my prints (it's not as bad as caesars but its still annoying ) as well and couldn't find the solution. My nozzle always getting dirty during everyprint and burned filament stick on the 3d print, is there any way to prevent it? I'm trying to keep the printer nozzle clean but it's nearly impossible.

I'm sharing what nozzle looks like after 37 mins print with light blue filament and it was perfectly clean when i started the print session.

If you have any idea about why it's happening please let me know.

Is this original nozzle from Zortrax? Because this happens if nozzle isn't rounded but flat at the top.