I have measured temps while printing, directly on what the controller thinks that the hotend is at.

I am still trying to determine why I get burns, stringing, stuck parts and melted supports.

I will post a followup with temps read at hotend with external thermocouple.

Interesting observation: if you cool the hotend quickly (blowing cold air) the controller shuts down power to thermocouple conditioner and starts again in a matter of milliseconds, in order to reset it.

Caesar, I think it would be better to have one summarized topic instead of 4 separate ones.

Thanks Caesar, can you explain the first one (bed heating) because it can't be bed temperature which is a little less than half the value in your table?

It is temperature of extruder while heatbed is being heated not heatbed temperature.

Sorry MI, i did it fast and didn't consider that for someone else it won't make any sense.

All values are hotend temperatures.

1) while bed is heating

2) at the end of hotend heating cycle

3) while starting to lay down the raft

6) while printing first layer of the part

7) after some layers are laid down

Are you able to measure the bed temperature using the same method?

Are you able to measure the bed temperature using the same method? 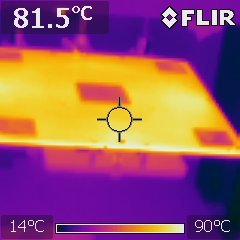 No. The 5 contact squares have a reflective surface. The flir has trouble to read the temp correctly on those. They have the same temp as the rest.