Since I have used printers that produce reasonable (acceptable quality) things, I'm looking for a storage system (printable) to store electronic parts in a design that fits to my furniture and taste (still searching).

Actually this thing is featured on thingiverse (http://www.thingiverse.com/thing:987412), interesting concept and i gave it a try.

It's printed in full, one have just to remove support to get it movable.

Well, removing support is a pain in the ass, they have support embedded into the object but that is removed by Z-Suite on opening the object.

I printed it with support light and was sitting half an hour for removing support.

But it works and is useable, for me I would like seperate and bigger parts that can be assembled.

y the initial design cannot be sliced as it is with most slicers, you either need manual supports or to upsize it. i have printed it at 140%!

(there is also a variation with all the parts unassembled)

I used the initial design and just printed it without any modification (sliced it with support lite).

I also saw the remix, it's not all separated, only the rails.

To assemble it one have to cut off the pegs and glue it together after the rails are inserted.

Simplify3D can slice it. But can’t produce zcode…

I had the same experience with an experimental file: a brush. Z-Suite couldn’t slice, probably corrected it thinking was an error. S3D also couldn’t but Slic3r did.

It’s good to have choices. And different tools.

Sometimes only one superb tool couldn’t be enough.

(A lot of cheap ones also not)

There is another one with the supports removed and supposedly repaired for better printing.

there is always the option to print the original one with 0.07mm outer contour offset, then the predesigned supports will get sliced

(most probably using the 0.6mm tolerance variation, as things will become tighter with the offset)

There is another one with the supports removed and supposedly repaired for better printing.

I wrote it above: this cannot be assembled without cutting the pegs and clue them together after applying the rails.

there is always the option to print the original one with 0.07mm outer contour offset, then the predesigned supports will get sliced

(most probably using the 0.6mm tolerance variation, as things will become tighter with the offset)

I will try to print that at the weekend.

I was so curious that I entered on my Studio computer through Logmein. (I was at home with a more modest machine).The connection was painstakingly slow but I was able to slice and have a screenshot. 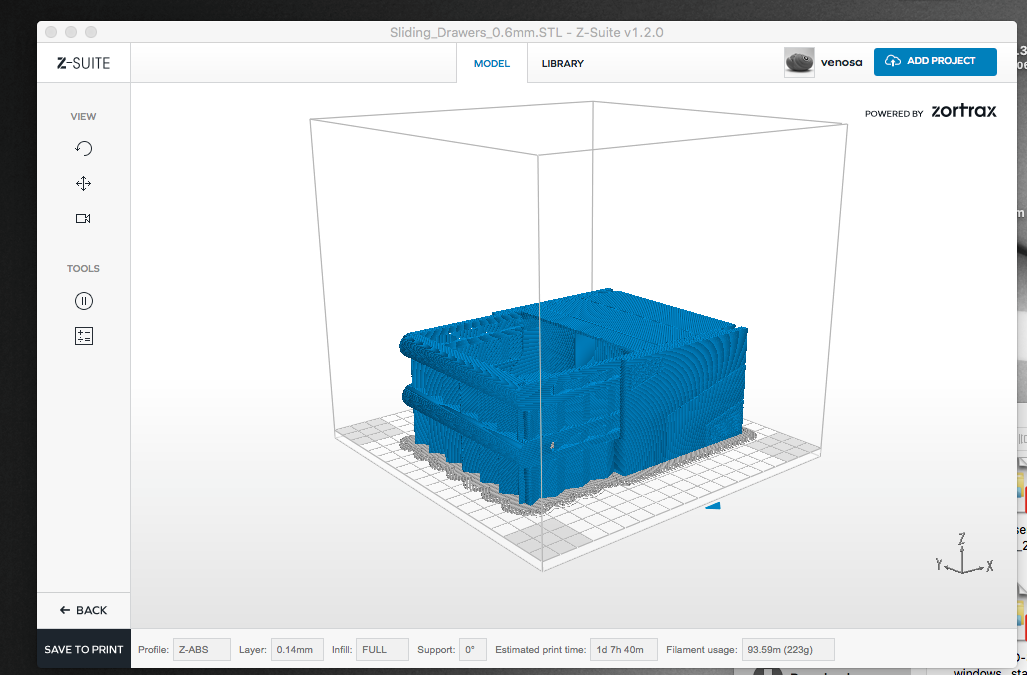 I tried to print the original object with integrated support, using the trick from voudas.

I could print it but the support while being thicker than Z-Suite Support Lite was lifting off at the upper rail.

At other areas it was not enough support and over all it was not easy removable, leaving bad surfaces.

After all I would consider the removal of those support structures when slicing the object with Z-Suite a welcome and hidden feature.  :)

Z supports are better because they also include the top dense layer that provides support to the whole layer above that. the predesigned supports of this file were anyway less than perfect as a design