During a print, I heard noises from the printer, and when I looked the nozzle was draging in the print.

I just leveled the bed today, after having removed and cleaned the perforated plate.

Used aceton and ABS slurry so everything was sticking just fine to the bed.

Any idea what can cause this? Error in code or some other fault?

The z-axis still works now when I tried printing another print...

Are the grub screws that connects the z screw to the stepper tight?

During a print, I heard noises from the printer, and when I looked the nozzle was draging in the print.

I just leveled the bed today, after having removed and cleaned the perforated plate.

Used aceton and ABS slurry so everything was sticking just fine to the bed.

Any idea what can cause this? Error in code or some other fault?

The z-axis still works now when I tried printing another print...

I saw something similar to this on a print that had a lot of support structure. I am not certain, but it appeared that when printing the structure, the print nozzle didn't know to avoid the non-support part of the pieces. If that's true, it would likely be a software issue.

I've kept an eye out for it, but I haven't done many more pieces that use a lot of support.

I have been away from the Zortrax a few weeks now, broke the nozzle when tightening it after cleaning.

Anyhow, got back to printing, and today I tried the planetary gearbox found on thingaverse, http://www.thingiverse.com/thing:23030/#files

Got home, and it was 85% finished and looked like this.

Many of the pieces can be used, but yet again, the Z-axis had stopped moving during print.

I have notised, when I manually crank the z screw with power off, that it sticks here and there, REALLY hard, but if you just wiggle it, or really just let go and apply force again, it starts turning again.

The z screw looks fine and lubricated, but I will wipe it off and lube it again just to be sure...

Check the screws on the attachment on the base. I mean the brass attachment that connects the z axis to the moving base.

As I see on the picture this is not problem with Z axis, I think it's problem with filament (maybe filament wrapped on a roll or stuck somewhere in extruder). Turn on the printer and use Load filament option, and look whether filament come out from the nozzle.

If you look at the link to thingaverse, you see that on 85% it should have built the screws and so on much higher, now, it has just smeered out a whole bunch of filament on the same z hight.

More than one thing here. Mark pointed to something wrong with extrusion what explains incomplete print. But you mentioned that cranking manually z axis is difficult, this isn’t normal. I suspect that some of the four screws that secure the axis are loosened compromising the axis alignment.

On this picture you can see a problem with the feed material, printer don't know whether extruder work or not :) So I think the printer print this object to the end but without material. The most important question is - in what place was the print head? If in the left corner, this means that I have right.  :) I think what he saying Mark is that the bed was not moving down but the extruder was still pushing plastic out. It Appears the Z axis was stuck and the printer didn't know it. I'm guessing he stopped it at 85%. Do you have V1 or V2 Peter? That looks like a ball screw..

Kyle is right, the printer continued to print, with material coming out of the nozzle, but the Z-axis not moving so it just smeered everything out.

How do you know what printer version printer you have?

Mark, the printer head was in the upper right corner, the same place as all the arrows you have drawn...

Peter look on printer menu. Go to information then hardware version. should display 01 or 02. That looks like V1 to me. Does it have a bearing at top of Z screw? This is V1. 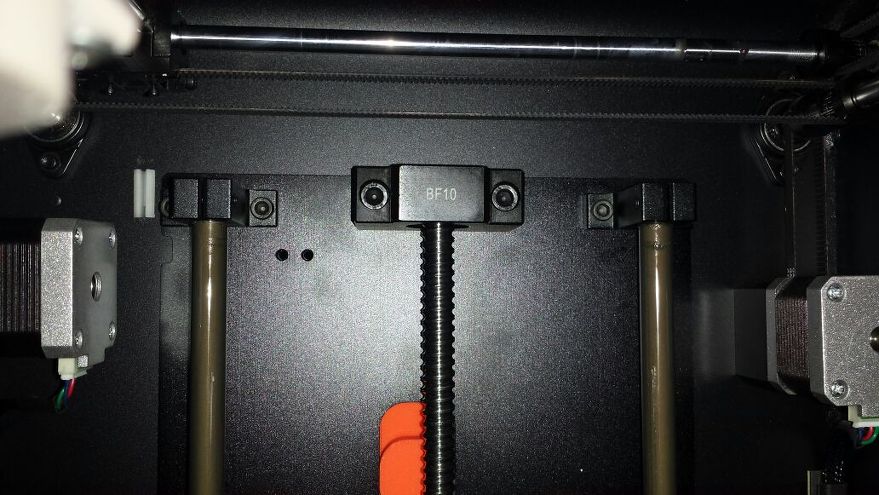 I have a v02 then. Regarding the screw, the v01 seems nicer than the v02, no bearing at the top anymore cant be a good thing?

So the removal of the upper bearing block is a logical improvement from an engineering perspective. Now the nut can be tight on the platform and the free floating screw tip can wobble around without inducing wobble into the platform.

-The lead screw printers are not overdefined anymore

Not everything that looks more expensive/fancy is necessarily better from a technical standpoint.... ;-)

Good explanation, but as a mechanical engineer myself, I would have gotten straight screws to begin with ;-)

What more differs between the V01 and V02? Must be something more major since you need to select the version in Z-suite?

Peter, as a mechanical engineer you know that this does not exist…

I would check the motor coupler.. There were a few that broke on the V1 model. Might just be a loose set screw on the coupling too. No transfer of motion. :huh:

Good idea, turn the screw and feel if the motor gets turned or if the screw slips on the motor shaft.

If you guys will have similar problems with prints please do not hesitate to contact us on support@zortrax.com . Please only make sure that your leadscrew is clean and there are no rests of plastic on it.